The restaurant Al Saray Fine Lebanese and Indian Cuisine endorses the same standard of excellence in food and service as with all other Gourmet House branches.

Our vision is to be the leading Lebanese and Indian cuisine dining establishment in Thailand, while giving our diners superior value-for-money.

Taking lead in the kitchen are our chefs from Lebanon and India who, together with a team of dedicated personnel,
work harmoniously to achieve the highest standard of efficiency and service. 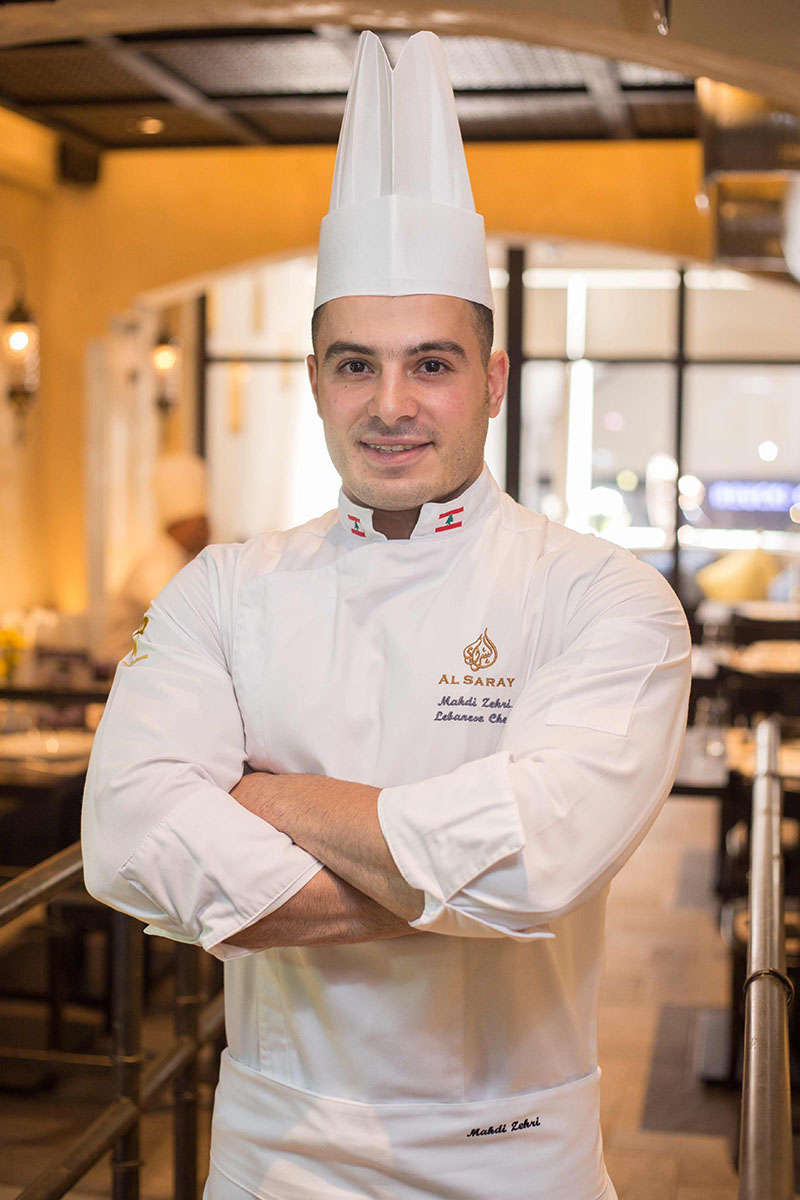 Chef Mahdi prides himself on his communication skills.  Since being appointed two years ago, he has always taken a pro-active role in customer satisfaction at Al Saray Fine Lebanese And Indian Cuisine.

“I enjoy meeting our guests and making sure every dish reaches them in a timely manner – not just as they had anticipated, but even better!”

In similar style, he brings an outsize, outgoing personality to maximizing team effort in the kitchen.  It helps that he knows every facet of Lebanese-style food preparation and cooking intimately.

After gaining his bachelor’s degree at Hospitality Management School in his native Beirut, Mahdi Zehri set out to learn through experience.  He rose quickly through the ranks at a succession of mainly five-star establishments in his region, starting just eleven years ago with Le Boulanger Restaurants Group in Abu Dhabi.

2012 found him appointed Chef-in-charge at Kababji Lebanese Restaurant in Khalifa City, and he returned to the UAE two years later as Executive Chef at the much-praised Zayzafoon Restaurant.

Following this hurtling progress, he took up his position at Al Saray two years ago, while still under the age of thirty.  But youthful enthusiasm hardly explains his rapid rise or his continuing success.

It’s more about skillful management of time and people, he explains, and plain old-fashioned hard work.  “There’s one more thing,” adds Chef Mahdi with a characteristically broad smile. “I really love a challenge!” 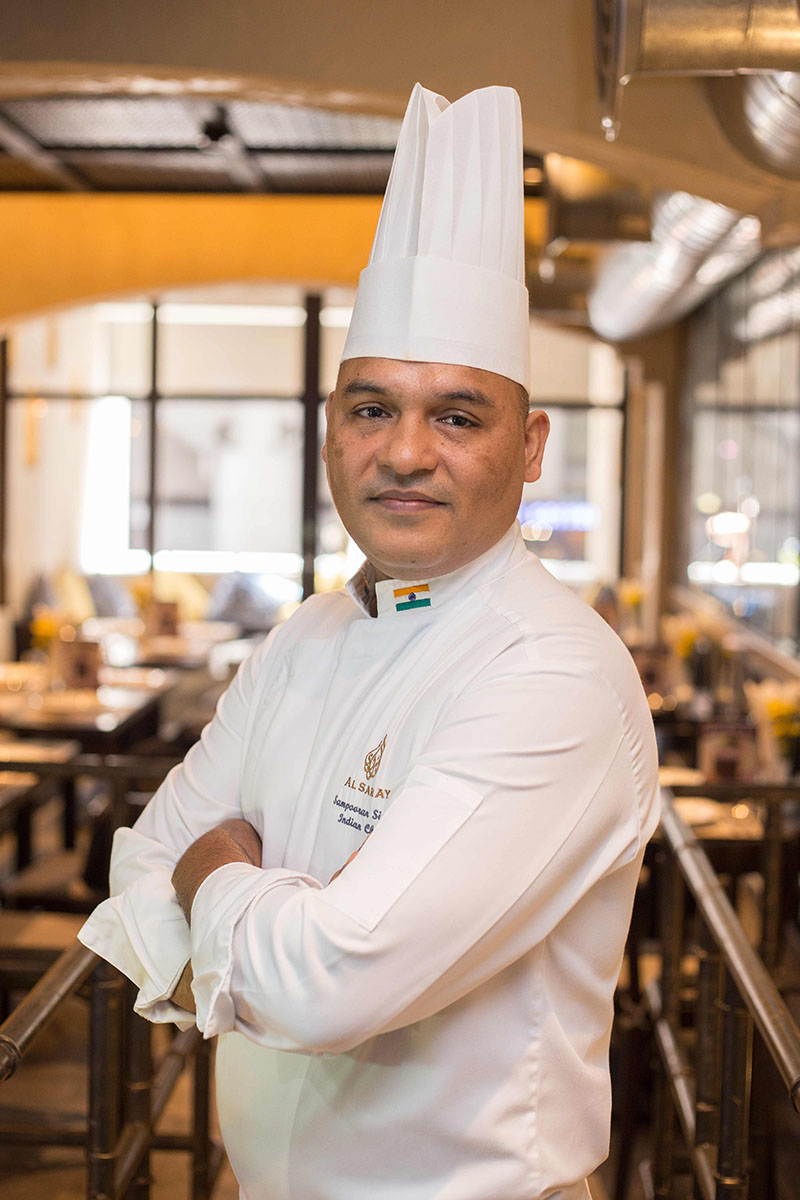 Born in the foothills of the Himalayas, Chef Sampooran brings the magic of his picturesque home region to Al Saray Fine Lebanese and Indian Cuisine, along with the prime experience of over twenty years as Head Chef at restaurants, resorts and hotels in his native India and the Middle East.

Beginning at the Taj group of hotels in Delhi and Mumbai, Chef Samparoon – known as Sam – went on to work at major establishments in Kuwait and Bahrain.  He was noted, not only for his culinary skills, but also for sharpening up operations in the kitchens he took charge of, while motivating his team and securing a rare degree of loyalty.

“I found I was able to get everyone working more efficiently, without losing a single member of staff.”

At Al Saray, he has won plaudits for the creativity of his recipes and the originality of his menus.

“Nobody loves the traditions of Indian cuisine more than me.  But too many restaurants rely on a repertoire of tried and trusted favourites.  I like to use modern methods and incorporate seasonally-available ingredients within the tradition I belong to.”

Regular guests testify to the success he has achieved, with dish after dish that satisfies expectations while at the same time springing a delicious surprise.

Both Lebanese and Indian cuisines are renowned to be healthy and are noted for their prominent use of herbs, seasoning and spicing. A typical Lebanese meal starts with small Mezze serving, Taboule salad, Hummus dip, Vine leaves and Kebbeh that also incorporate olive oil and garlic. Meanwhile, the entrée usually consists of healthy grilled meat, chicken and fish in addition to bread. Indian food is best known for its diverse use of spices that culminates in a curry, a variety of naan bread and yogurt. The meal is heavy on spicing, which is accompanied by spiced tea for the purpose of promoting digestion.

This website uses cookies to improve your experience while you navigate through the website. Out of these, the cookies that are categorized as necessary are stored on your browser as they are essential for the working of basic functionalities of the website. We also use third-party cookies that help us analyze and understand how you use this website. These cookies will be stored in your browser only with your consent. You also have the option to opt-out of these cookies. But opting out of some of these cookies may affect your browsing experience.
Necessary Always Enabled
Necessary cookies are absolutely essential for the website to function properly. These cookies ensure basic functionalities and security features of the website, anonymously.
Functional
Functional cookies help to perform certain functionalities like sharing the content of the website on social media platforms, collect feedbacks, and other third-party features.
Performance
Performance cookies are used to understand and analyze the key performance indexes of the website which helps in delivering a better user experience for the visitors.
Analytics
Analytical cookies are used to understand how visitors interact with the website. These cookies help provide information on metrics the number of visitors, bounce rate, traffic source, etc.
Advertisement
Advertisement cookies are used to provide visitors with relevant ads and marketing campaigns. These cookies track visitors across websites and collect information to provide customized ads.
Others
Other uncategorized cookies are those that are being analyzed and have not been classified into a category as yet.
SAVE & ACCEPT